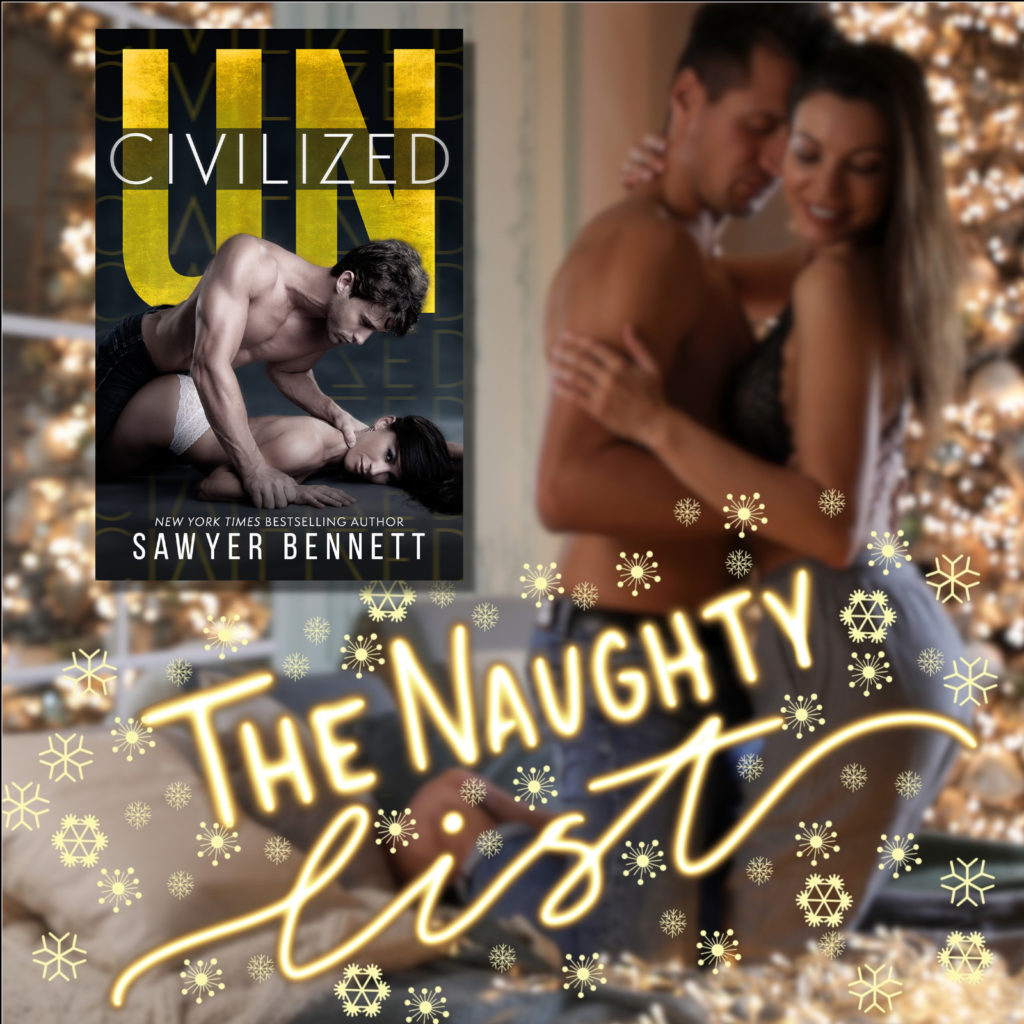 A rush of breath pours out from Moira’s mouth and fans across my collarbone, even as a tiny shiver courses through her body. She’s as turned on by the image I just painted as I am by having created it.

I feel her body melting, her resistance only hanging on by a thread. I could have her about ten different ways to Sunday, but there is only one way in which I want her now. I press forward.

“Get on your knees,” I demand, because I know that she wants me to force her at this point. It’s what she wants, I’m sure of it.

“No,” she whispers, and I smile on the inside. Her tone says otherwise.

I give her neck a soft squeeze again to remind her that she’s standing here pushed up against me only because I demand it so.

“Don’t ever say ‘no’ to me again,” I growl at her. Using my grip on her neck, I pull her back from my body and turn her away from me. Giving a slight push, I urge her downward and almost want to cry out in victory when she gives me not an ounce of fight as she starts to lower herself.

I let my knees bend and lower myself down to the floor with her. Her knees hit first, then my mine, and I continue pushing her forward until her cheek rests against the carpet and her ass hovers just in front of my restrained cock.

“You remember the first time you saw me?” I whisper as I squeeze her neck again gently.

“You wanted me to fuck you that way, didn’t you?”

“God yes,” she moans, and victory and lust surge through me. My cock, which has been getting progressively harder, now pushes brutally rigid against the tight denim covering my crotch.

“Tell me then,” I command her, completely enjoying the way her resolve is unraveling before me.

“Tell you what?” she asks on a stuttering breath.

“Tell me all about the first time you saw me. Tell me a story, sweet Moira, and then I’ll decide whether to give you what you want.”

Moira tells me then, in a rush of capitulated words, how she watched me across the firelight, fucking Tukaba and wishing it was her body underneath me. She tells me her blood was on fire, and she could scarcely breathe because the way I was staring at her was sucking the oxygen from her body. In a low moan, she tells me she could actually feel my cock between her legs and she whispers with no shame, only regret, that she could feel my orgasm as my body shuddered in release.

“That’s a good story, Moira,” I tell her, trying to keep my words confident and true, so she doesn’t know just how close I am to losing control with her.

“It’s how I remember it,” she says with a burst of boldness and, even though I’m aiming for her surrender, I find I like that Moira isn’t going down without at least a little fight in her.

“Exactly the same,” she says with assurance and I know, at this moment, she’s mine.

I bring my free hand up and grasp the bottom of her dress, dragging it up the backs of her thighs and over the rounded firmness of her ass. Slowly, I reveal the loveliest, sexiest pair of white lace underwear I could have ever imagined on a woman. Another new favorite word enters my repertoire—lingerie.

When her ass and lower back are completely devoid of her dress, I tell her. “Before I give it to you, tell me one more thing.”

“What do you want me to tell you?” she demands of me. I squeeze her neck because it’s a little too impudent for my tastes right now. She pushes back against my hand slightly, and I tighten my grip more.

“I want you to tell me what the greatest thing is you’ve learned about me so far since you took me from my home.”

Her upper back rises slightly, not from any fight left in her, but because she inhales deeply. When she lets it all out, she tells me with conviction and a hint of sadness, “I learned that you… Zacharias Easton… are an uncivilized man.”

“Yes,” I tell her in praise, and my fingers go under the lace edge of her panties. “You learned well.”

Moira is silent for a moment, and then, “Zach?”

“Teach me more,” she whispers.

My heart seems to almost leap from my chest over the plaintive tone of her voice. Grasping the lace of her panties, I drag them over hips… her ass, and pull them down the backs of her thighs. “Oh, baby… I’m going to teach you how good it’s going to feel to be fucked into submission by an uncivilized man.”

She gives a soft moan of anticipation. When her panties are pushed down to the backs of her knees, I lean to the side so I can get a glimpse of the backside of her pussy. Its flowery petals are dewy looking. I reach down and, for the first time ever, push my finger inside of a woman’s warmth.

Hot breath hisses out from between my clenched teeth. “You’re so wet.”

“Don’t move,” I order her as I pull my finger back slightly and push it back in. She stays absolutely still but moans again.

Releasing my hold on her neck and removing my hand from between her legs, I quickly take off my shirt because I don’t want anything impeding the view of her backside. I quickly unbutton my jeans and unzip them, going carefully because I’m swollen so hard, there’s barely any room left. Giving a quick push of material, I slide the denim and my underwear down past my hips and free my cock.

Pearly fluid is leaking from the head and, using my hand to guide myself, I rub it over one of her ass cheeks, creating a glistening path of over her pale skin. “I’m wet for you, too.”

I bend over and grip her by the back of her neck again. “Please what?”

I guide my swollen shaft to her pussy, rubbing the head through her wet folds. The sensation is overwhelming, causing a tightening of my muscles from head to toe. I lean my hips in slightly and push into her just an inch.

She’s so fucking tight, but her slickness sucks me in just a little further. I watch as Moira’s ass cheeks clench in anticipation, and her fingers dig into the plush carpeting. Now that I’m lined up perfectly, I release my hold on my cock and grip her hip. I wait for just a moment, relishing in the graceful lines of Moira’s back and the way her fiery hair is spread all over the carpet. Her face is turned to the side, and her profile is exquisite. Eyes slightly open, her lips turned upward in a pleasurable smile. I’ll never forget this as long as I live.

With one coordinated move, I pull back on her hips and slam my own forward, lodging my cock in deep, my pelvis pressed flush against her ass.

A groan tears out of my throat because that first feeling of her pussy completely enveloping me is almost more than I can bear. Moira gives a soft cry, and her eyes squeeze shut.

I stay still for a moment, but then Moira contracts her inner muscles around me, squeezing my shaft deliciously.

“Fuck,” I grunt out and, in an involuntary reaction, my hips pull back and I slam back forward again, trying to replicate that feeling.

Moira moans long and low, and I want to prolong that sound, so I pull back and slam forward again. But then I still once more, taking a deep breath and trying to get back my bearings. I can’t lose control. Normally, my couplings are slow and steady, a forceful dance to assert my dominance and show the strength of my reserve.

I prepare to pull back slowly, so I can ease into her again and torture her exquisitely.

My body trembles over those words and the craving that seeps out of her. This is supposed to be about me… about my dominion and authority. But her words cause my body to clench tightly with the need to burst forth in a supreme, hardcore fucking. I squeeze my eyes shut, envisioning a slow mating, but Moira slays me again.

“Fuck,” I hiss out at her and pull my hips back, slamming into her so hard that she scoots across the carpet a few inches and my balls slam almost painfully against the backs of her thighs.

An animalistic need courses through me. Tightening my grip on her neck, I start repetitively slamming into her, my skin slapping against hers so hard it sounds like thunderclaps. I look down at my cock tunneling in and out of her slick pussy and feel the last vestiges of my control snap.

I fuck her mercilessly, fearful that I might be tearing her up from the inside out, but unable to stop myself. My body lurches into her, my chest heaves, and my cock drills her hard.

Moira tries to writhe underneath of me, but I hold her tight. If not for her moans of pleasure, I would be worried I was hurting her, but I’m not sure anything could stop this tempest that I’m unleashing on her body.

Skin slapping… her warm, wet muscles massaging me to near madness. The smell of our mutual arousal coating my senses.
As I heave my body against hers, I can’t help the grunting noises that start to come out of me… reminding me that at this moment, I’m more animal than human.

I fuck her hard, throwing every bit of reserve and control out the window.

Moira’s soft pants of “Yes, yes, yes,” fuel me on as I drill into her over and over again.

Suddenly, Moira’s entire body spasms and her inner walls clench onto me in a warm, wet vice as I realize she’s orgasming. She screams so loudly that I know her throat will be sore tomorrow, and I feel my own balls pull upward tightly, prepared to rocket my seed deep into her body.

I release my grip on her neck and bring that hand to her other hip. Angling both of my thumbs inward, I spread her ass cheeks apart, just so I can get a better look at the way my cock, which is wet with her desire, speeds in and out of her with frantic need.

My own climax starts boiling, and a warm flush spreads across my skin. My head spins as I slam into her again and again, until finally I’m firing off into her. My entire body falls onto her back, pushing her flat to the floor as I start to come. I have no control over myself. Even as wave after wave of pleasure courses through me, my hips continue to pump at her backside, my cock only able to make shallow purchase but still moving within her until I’m absolutely and completely milked dry.

Even after I’m empty, tiny spasms continue to run up and down my spine, in what must be the longest, hardest orgasm I’ve ever had in my entire life.

Never knew it could be this way.

Never knew that losing control could be so fucking satisfying.