You know who Kynan McGrath is, right? Tall, tatted British commando? If his name doesn’t ring a bell, he’s one of the most sought after secondary characters I’ve created. For years now, fans have been requesting his story. If you missed him, you can learn about this sexy and way too sinful man in any one of the Wicked Horse Vegas books. Here’s a hint: he hangs out in a sex club. Like a lot!!!!

First, on March 12, 2019, Wicked Force will release and it’s a prequel novella starring none other than Kynan McGrath. Learn about his first love and how she brought him to his knees. Even more exciting, Wicked Force is part of Kristen Proby’s crossover collection to her Big Sky series set in Cunningham Falls, Montana. If you haven’t tried this series out, jump on it. It’s amazing!!!!!!

On May 7, 2019, Kynan’s story continues in a swoony, sexy second chance, full length romance novel. You got a sneak peek of this story if you bought the Cocktales Anthology, which if you didn’t, don’t worry. I’ll be publishing that again in April, 2019 for you to whet your appetite.

Now, here’s where things get really exciting. Kynan’s second chance romance is also a bridge book to an entire new series I’ll be launching called Jameson Force Security. If you like hot, alpha special forces guys and spine-tingling romantic suspense, climb aboard to this new series of stand-alone books. Kynan’s book is called Code Name: Sentinel and you’ll get all the same sexy, lovable characters and emotional storylines, with an added punch of military/ security forces suspense.

Keep your eyes peeled for these releases because 2019 is just around the corner!!!! 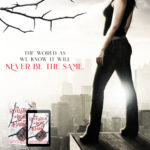