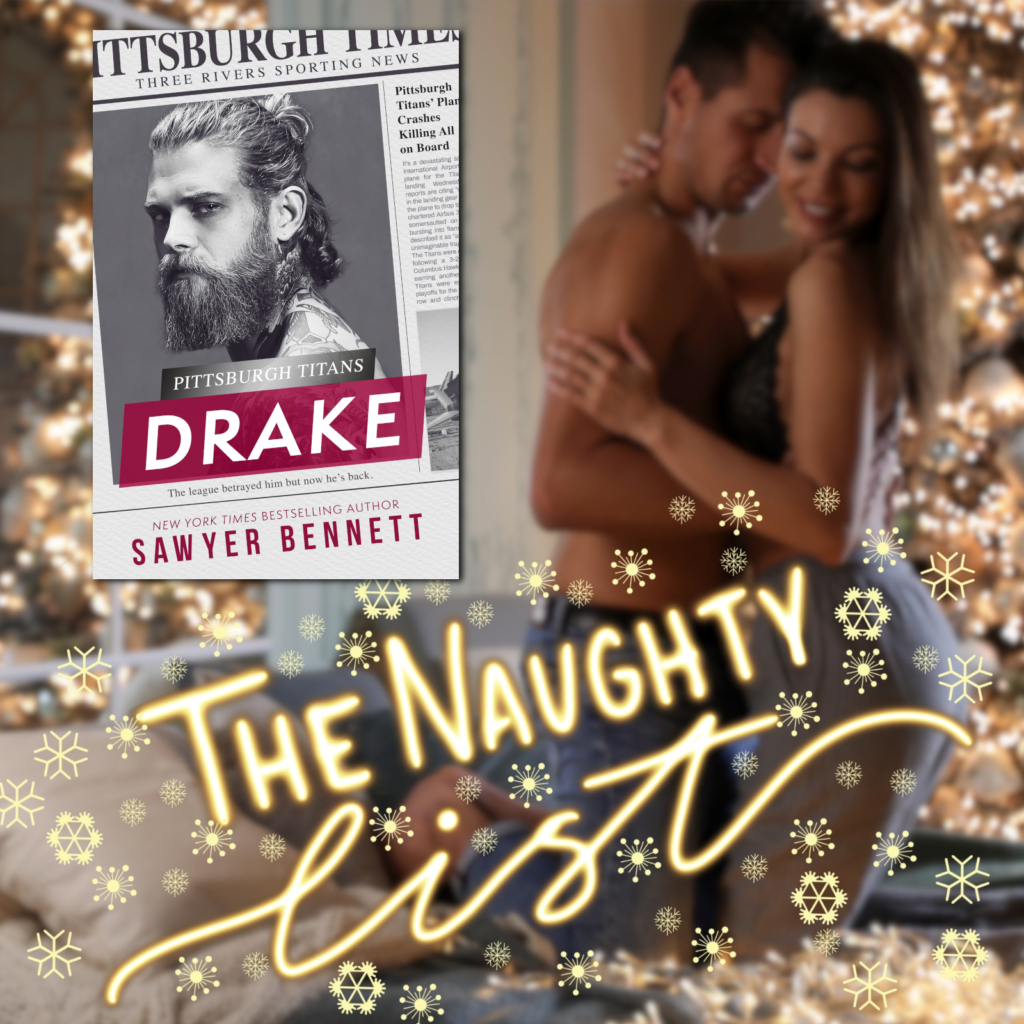 Drake’s hands hang loosely at his sides, but his fingers are curled inward as if he’s waiting for an excuse to form a fist.

He’s clearly itching for a fight, and I don’t think I’m really even the problem. I’m just the face of it.

I walk toward him, keeping my tone level. “What part of me telling you to make an appointment didn’t you understand?”

He ignores my question, speaking to me through gritted teeth. “In case it wasn’t clear down there, and because Derringer cut me off, I do not need you to defend me with the media.”

His tone is ice, despite the fury in his eyes.

“I don’t think you need me to defend you, but I’m wondering why it bothers you so much?”

Drake sneers at me. “Because you’re doing nothing more than keeping a story alive. How about try the words no comment for a change, rather than using me to get screen time?”

Now I’m pissed. I move toe to toe with him and poke him in the chest. “You ungrateful son of a bitch. You’re pissed at the league because no one stood up for you back when the allegations came out, and now you’re pissed because someone is standing up for you. You need to pick a lane and stay in it.”

Drake lunges, and it’s so fast, I can barely take a breath before he’s jerking me into his body. I open my mouth to protest, but it’s immediately cut off when his mouth slams into mine.

My entire world spins like I’m caught in the power of a tumbling wave. I try to kick for the surface before I drown, but Drake’s kiss is an undertow from which I can’t escape.

The fact my fingers curl into his T-shirt in an attempt to pull him closer tells me I’d rather drown.

A slide of Drake’s tongue against mine, and a ripple of lust courses through me. Our teeth clash, and his palm slides to my ass to squeeze. I bite his lower lip, and he curses before jerking my formfitting dress up my legs to bunch around my hips.

My head swirls with how fast things are moving, but it’s the most exciting thing that’s ever happened to me, and you couldn’t pay me to slow it down.

His hand plunges down the front of my panties where he rubs a skilled finger through my wet folds before circling my clit. I groan from the intense pleasure, and my knees almost buckle when that finger slides knuckle deep inside me. Drake merely holds me upright with his big palm curled under my ass.

“You’re soaked,” he growls into my mouth as he withdraws his hand, and I hear the triumph he’s feeling.

I gasp as he hauls me up his body. Wrapping my legs and arms around him, I hold tight as he walks me over to my desk. A small part of my conscience warns me to stop this, but the turbulent surge of lust he’s sent through my entire body feels too damn good for me to let it go.

There will be no sweeping of materials off the desk to make room as I’m a neat freak and my desk is bare except for my laptop, a landline phone, and a wooden box on one corner where I put completed work for Tina to pick up.

Our kiss is only broken when Drake settles my ass on the edge of the wooden top and starts to pull off my panties.

“The door,” I gasp, jerking my head over my shoulder. “Lock it.”

“No time,” he says as he settles into my chair and scoots it forward. “Suggest you keep it quiet.”

His hands spread my legs wide, and I am completely bared to him. His gaze is an inferno as he takes me in before glancing up. “You might want to lie back for this.”

I know what this is because he’s staring too hungrily between my legs for it to be anything other than his mouth on me.

There’s no hesitation. I go back on my elbows and save him the hassle by moving one of my legs over his shoulder. I curl it in tight, an insistence that he get on with it, and watch with eager eyes as he bends forward to press his lips to my pussy.

I bite down hard on my lip as he zeroes in on my clit. His large hands grip my thighs, fingers digging into me. Drake’s beard tickles my skin, and he hums in pleasure against my flesh.

He’s a master with his tongue, and by that, I mean I’m already rushing headfirst into what I know is going to be a shredding orgasm. He absolutely devours me, and I’m so turned on by the lewdness of the act—and the fact this man is a virtual stranger, as well as a major pain in my ass—that when I come, I have to bite down on the heel of my hand to keep from screaming. My back arches and my hips undulate against his mouth, dragging out more ripples of pleasure as he continues to work at my clit.

“Enough,” I hiss, not able to take any more direct contact, and more than anything, wanting to return the favor. I need his cock in my mouth now.

Drake rises from my chair—dislodging my leg from his shoulder—and reaches into his back pocket. The angles of his brow make him look harsh and angry, and maybe he is, but I can’t think about that right now as I watch him pull a condom from his wallet.

I sit up, my legs still wantonly spread, and tear at the foil. I guess sucking his dick isn’t on the agenda right now, but this is even better. I want to feel him inside me.

Grumpy, enigmatic man that he is, I don’t think there’s any other way to understand him.

I tear into the foil but get sidetracked by Drake unbuttoning his jeans. My mouth waters as he pushes them down his hips and frees himself.

Drake wraps his hand around his cock—the tattoos on his arms writhing—and strokes it, his eyes moving to me. He nods at the condom. “Need you to do your part, boss.”

I ignore the nickname and pull the condom free. While he holds himself still, I roll it on, making sure to squeeze on the down stroke, which elicits a grunt of approval.

My entire body quivers in anticipation of having him inside me, and I start to lean back. To my surprise, his hand slides to my nape, and he hauls me off the desk into a standing position.

His mouth claims mine in another brutal kiss that makes me ache for him. It’s short-lived, though, as he spins me around so I’m facing my desk and then pushes me down onto it. My chest and stomach hit the wood, and those big hands move to my ass where he kneads the flesh.

Then I feel him pressing inside me, and it’s glorious.

I look over my shoulder, and my breath freezes at his expression. It’s twisted with need, but his eyes are softened with awe as he watches himself disappear into my body.

Slowly he slides in, inch by agonizing inch, until I’m stuffed full of him and his pelvis presses against my ass.

Hands at my hips, he wastes no time setting a fast pace as he fucks me. Greedy, deep thrusts, taking for himself the pleasure he deserves after giving me such an amazing orgasm.

It feels so good and so right, despite being the filthiest, most wrong thing I’ve ever done.

So very fucking naughty, here in my office with a player, but yet… it’s just right.

Drake jerks me back a bit, only to curve over my body so he can thrust his hand between my legs. His fingers hit my clit, and I practically lose my shit.

I moan so loud that Drake’s other hand clamps over my mouth, leaving just enough room to suck in oxygen through my nose. His chest presses into my back and his teeth graze my ear. Through his staccato breaths, he grunts with every thrust. “Love. Fucking. Your. Pussy.”

I can’t reply with his hand over my mouth, so I nod furiously and he chuckles darkly.

“Might come up here every day and fuck you now,” he says as he slams into me over and over again.

God, what a job perk that would be.

“Has your boy toy ever done this to you? Come into your place of work and bent you over your desk?”

I can’t answer because I’m too busy moaning from just how good he’s making me feel… like never before.

But no, Clay would never do this. He’s too mannered, and God help me, one of the reasons I’m so attracted to Drake is because he’s not mannered at all.

He pretty much told me to go fuck myself at our first meeting when we offered him a spot on this team, and while that was about as unprofessional as you can get, a part of me admired him for his principles.

I lose concept of time, but it doesn’t feel like much has passed since my first orgasm. My second one catches me by surprise, ripped free from the unholy combination of Drake’s deeply powerful strokes and his fingers strumming between my legs. The man’s a multitasker as he manages to keep his hand clamped over my mouth the entire time so I don’t scream and give us away.

Drake’s hand moves from between my legs to my hip where he holds me steady so he can continue to drill me. I know without a doubt he could wring a third orgasm from me, but suddenly, he plants deep and lets out a feral growl of release as he jerks inside me.

His breath hisses between his teeth as he settles his weight on top of me. Not too much to crush, but enough that I feel pleasantly trapped.

Drake’s hand on my mouth moves to my jaw, and he twists my head where he stares at me a long moment before giving me a hard kiss—lips only, no tongue. Pressing his forehead to mine, he says, “After the way the league fucked me, I never knew fucking the league could feel so good.”

Direct from Sawyer (available at Audible on 1/3)