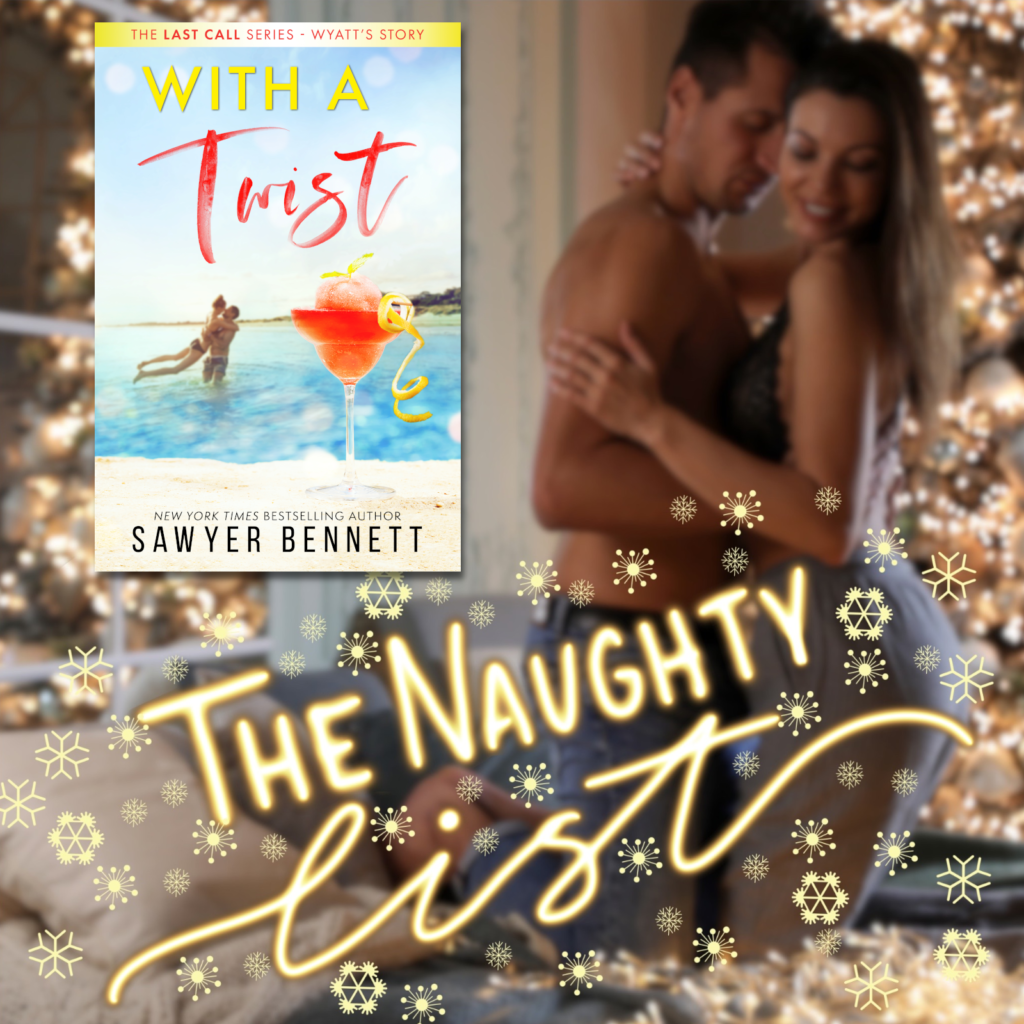 I slowly drop to my hands and knees and start crawling toward Wyatt. His face is hard, a muscle popping at his jawline. He gazes down at me intently and I see the subtle grinding motion of his teeth, silently gnashing at each other.

If I were really Nikki O, down and out stripper who needs this job and would do anything to keep it, I would think Wyatt was looking down at me with barely uncontrolled lust. But as FBI agent Andrea Somerville, who knows exactly what stakes are at risk here, and who remembers when Wyatt told me the other night that he wouldn’t let anything bad happen to me, I see a man that is furious and regretful all at the same time that I’m crawling toward him.

Lance gives a dark chuckle behind me. “She looks phenomenal from this angle, Raze.”

Closer and closer I get to Wyatt and my heart is thundering deep within my chest. My heart aches for him as I take note of the very clear erection pressed against his black jeans, showing his traitorous body.

I pause in my crawling and turn my head to look back over my shoulder. Lance’s eyes are pinned onto my bare ass since I’m wearing a thong but then his eyes slide to mine. “You need to beg him.”

I give Lance my most capitulating look coupled with a smile of assent and turn back to Wyatt.

Looking him straight in the eyes, I start crawling toward him again.

His jaw muscle pops again and his fingers curl tightly into the armrest.

“Please… let me suck you down.”

Teeth grinding, his legs spread apart to give me room to crawl right up to him.

Reaching out, I place one hand on his knee and use it to pull myself up in between his legs. I hope he can see the apology in my eyes when I say, “Please… Raze… let me make you come with my mouth.”

“That’s it baby,” Lance murmurs behind me and a shudder of disgust over the lust in his voice floods through me.

My eyes flutter closed and I swallow hard. When I open them back up, I don’t dare to look at Wyatt, but instead look down at the straining fly of his jeans. My hands are shaking when I reach out and pop the button, and his hips shift slightly as I lower the zipper.

“Lift your ass,” I say quietly and he does as I ask. I hear his teeth grind together harder and I internally wince because I know that hurts.

My fingertips slip into the waistband of his underwear and I gently tug them and his jeans down. His erection is revealed and when the constraining material is removed, it stands up tall, and thick and hard as a rock.

It’s fucking beautiful and even though this is an act… a part of the job… the tingling sensation between my legs tells me this is not going to be a hardship.

“A little privacy,” Wyatt says thickly and my eyes jerk up to his. He’s not looking at me though. His gaze is focused over my shoulder at Lance and the hard glint I see reflecting leaves no room open for Lance to argue.

“Enjoy,” Lance says and then I hear his shoes quietly whispering over the carpet. I don’t turn to see him leave but instead watch Wyatt’s gaze as he follows Lance’s movement. I hear the office door open, then close again, and we are alone.

Wyatt’s eyes slide to mine and I expect to see relief that Lance is gone. Instead, his face is awash with regret.

His hands come up to clasp on either side of my head and he pulls me up as he leans down toward me. I’m stunned when his mouth comes down on mine and he gives me a swift kiss. His lips are velvety against mine and lust courses through me. I open my mouth, but all too quickly he pulls back and sticks his lips near my ear.

“I’m sorry,” he says in the barest whisper that I almost can’t hear him.

“No,” he says urgently, still in a voice so low that it sounds like it’s being carried away on the wind. “I’m sorry because there’s a camera over your shoulder. He’s watching us.”

“What?” I breathe out in surprise while Wyatt moves his lips across my skin. I realize he’s hiding his mouth so Lance can’t see what he’s saying to me.

And understanding slaps me silly.

He’s watching to make sure that Raze is fully on board with showing dominance over the women here. He’s making sure that Raze has no problem in taking advantage of me… of abusing me.

My mind is spinning and then spins harder when Wyatt brings his mouth back to mine. Another hard kiss and then he’s murmuring softly against my lips. “Listen closely… the camera is to your back so if you bend over my lap, we can fake this. He can’t hear us… just see us. Your hair and the camera angle will hide what you’re really doing. It’s time for both of us to put on a performance. Just follow my lead and fucking fake it.”

I take in everything he says to me in a mixture of part relief, part disappointment, but ultimately acceptance as this is the best thing possible so that boundaries aren’t crossed. I nod and before I know it, Wyatt’s hands move to my hair where he grips my head roughly.

He pushes down on my head and I know that his face is visible to the camera again because he clearly says, “Time to put that mouth on my cock, baby.”

This is said with another low murmur, as it’s doubtful that Lance is at the door listening. Instead, he’s in the security room watching the silent feed on this office’s camera, but if he’s adept at reading lips, Wyatt is giving him what he wants.

I bend my head down toward Wyatt’s lap and my long hair floats all around me, shielding my face and Wyatt’s cock that’s sitting inches from my lips. It’s dusky with a thick vein running along the bottom and I feel terrible that Wyatt is suffering right now.

Bringing my right hand over, I bring it up under the curtain of my hair and lay it on his pelvis, so that it looks like I’ve taken him in my grasp. I bend over further, and it’s my hope that as Lance watches, he thinks I’ve taken Wyatt deep into my mouth.

I start a fluid bobbing motion with my head, keeping my eyes wide open so I don’t actually make contact with Wyatt’s skin. I watch that beautiful cock come close to my lips, then get further away as I raise my head. He shifts slightly under me and I can imagine his head is thrown back. His hands tighten in my hair, and he actually exerts slight pressure to help keep me from touching him.

My heart thumps with exhilaration that we are pulling this ruse off, and also with a weird, achy need. I also feel tremendous guilt that, while this is hard on me, Wyatt is the one with the straining erection that isn’t going to get a damn bit of relief.

I bob up and down, and in my zeal to put on a star performance, I push down a little too hard and my chin grazes against the tip of his shaft. Wyatt hisses… almost as if he’s in pain and my body freezes. I raise my eyes even as his fingers dig sharply into the back of my neck and side of my head.

His look catches me off guard and the oxygen is pulled from my lungs. His eyes are filled with lust and frustration, yet he says to me softly, “You’re doing great baby. Keep going.”

Anger, and guilt, and shame and fury roll back through me again, and I am pissed that Wyatt is being made to suffer this travesty.

“This isn’t working,” I whisper.

“Sure it is,” he says through gritted teeth and pushes back down on my head so I can resume my ruse. “Just a little more and I’ll fake the world’s biggest orgasm.”

“I’m sorry,” I murmur and our eyes lock. I hope he can see how truly, truly sorry I am for what I’m getting ready to do.

I lower my head and move my hand to grip him at the base of his cock. The minute my fingers touch his warm flesh, his entire body tightens. I open my mouth and guide the tip of him inside of me, taking him deep inside… straight to where my tongue ends and my throat begins.

“Fuck,” Wyatt groans and his hips buck up hard against me.

His skin is warm, salty, and pulsing within my mouth. I start moving… desperately, with purpose. I want him to come… I want him to have a moment of peace and pleasure, and I want more than anything for us not to fuck up this operation when we are too close to the finish line.

Mostly, however, I want Wyatt to feel good. I want to make him feel good.

I move over him, licking and sucking. I pump him hard with my hand and moan low in my throat so he feels the vibrations against his skin. I want this to go quickly, because I want us both to get past this, and because the longer I keep him in my mouth, the more I yearn for something more.

I feel twitchy and unsettled, a deep, empty feeling within me. I want the world to melt away so there’s no Lance watching us, no strip club music thumping outside the doors, no jilted fiancée feelings within me. I wish this was just me and Wyatt… two people that are attracted to each other and can bask in the physical pleasures we could afford in.

“Fuck, fuck, fuck,” Wyatt starts chanting and a quick raise of my eyes reveals his head to be thrown backward and the muscles in his neck corded tight. His fingers dig into my scalp, then relax in spasms. His hips gyrate underneath of me with need and I move up and down on his warm, slick shaft.

“Fuck, fuck, fuck… coming… fuck… coming,” Wyatt groans and pushes down hard on my head. I suck him in extra deep, feel the first shot of him against the back of my throat and I take every bit of him down. His breathing is erratic…sharp blasts of air that I can feel fluttering against my hair. I softly lick against his skin before pulling away from him… terrified to look up in his eyes.

He doesn’t give me a chance to face my cowardice though because his hands come under my armpits and he’s hauling me up his body. His mouth meets mine brutally and his tongue dives in deep. Wyatt kisses me deeply… so invasive I feel him everywhere and my fingers clutch hard onto his t-shirt.