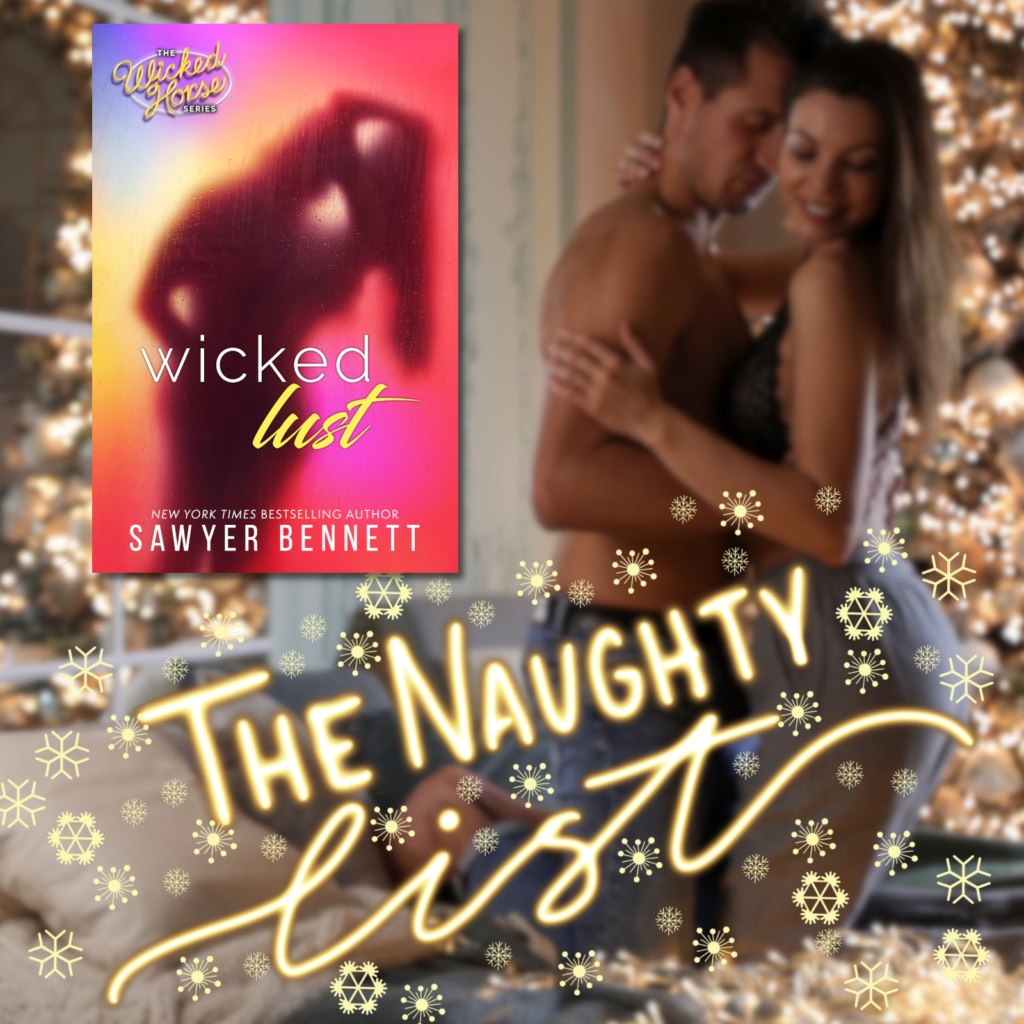 I lean my face down near hers, my eyes pinning her with fury. “Do you want it so bad you’ll just jump in the next guy’s bed?”

She shakes her head emphatically, those blonde curls flying back and forth. “No… I only want you.”

I give a bark of a skeptical laugh and start pulling her away from the bar, through the crowd and out the exit door. When the night air hits us, I hiss at her, “You’re getting in your car and going home.”

Sloane steps off the slate paver outside the door and digs those heels into the dirt. Her arm jerks free, and she says, “I’m not going home.”

“Well, you’re not going back in there,” I flatly tell her.

“Then take me out here,” she whispers.

Every cell in my body swells with lust, even as a fissure of anger ripples through me. “You’d like that, wouldn’t you?” I sneer at her, trying to shame her for her wanton ways, but Christ… I want her so damn bad.

In the glow of the light outside the Silo door, I can see her cheeks turn red. But she looks me straight in the eye, “Yes. Bridger’s idea to spur you into action. I went along with it.”

“Fuck,” I mutter as I look back toward The Wicked Horse.

That asshole. Putting temptation right in front of me, knowing damn well I’ll let my cock speak its own mind.

“So, you want me to just fuck you out here?” I put enough of a shaming sneer in my words to have her blushing again.

“I’d prefer you take me back to your house, but if all I can get of you is out here, then yes. Wherever you want. However you want it.”

I might have been good had she said something different. I might have even had the balls to walk away from her sexy body and yearning eyes.

But however I want it?

Unfortunately, I want it hard and fast, and I want it right this fucking minute. My options are limited, and I quickly weigh them.

Back into The Silo where I can pull her into the supply room again.

Or even better to possibly shame her, right into one of the rooms so I can fuck her for the entire club to see, and then walk away from her.

But no, those aren’t right either.

Because the way in which I’m about to sacrifice my principals demands privacy.

So I take Sloane’s hand and lead her around the side of The Silo. I walk her halfway around the circular outer structure, until we are in absolute darkness with nothing around us.

Turning her from me, I have her face the concrete building. Grabbing both of her hands, I place the palms against the staves. I step into her backside, press my lips to her ear, and whisper, “I can have you any way I want?”

She takes in a shaky breath and nods. “Yes.”

Dropping my hands, I take the edge of her skirt and pull it over her hips where it hugs her waist and stays out of my way thanks to the miracle of spandex. I tilt my head to the right and look at her in the glow of the moonlight.

I drop my hand to that sweetly rounded ass, push my middle finger down in between her cheeks, and rub my finger along the seam. She moans and jerks against me.

“Can I have your ass tonight? Would you give that to me, sweet Sloane?”

She chokes out a half sob, half moan and murmurs, “If that’s what you want?”

My cruel, black heart… the one that’s still hurt and betrayed, gives a soft laugh that borders on evil. “Nah… that was something special we might have had, but I’m just not that interested in it anymore.”

Which is a fucking lie. If I had some lube, I’d so take her ass, but without it, I don’t want to risk hurting her. And besides… that would take time and I don’t have that luxury. This is going to be a hard, fast, impersonal fucking so I can give some relief to my balls, which have been squashed into knots since first locking eyes on her tonight.

I pull my head back and angle it further to the side so I can look at Sloane’s face. She has her cheek pressed up against the side of the wall and there are unshed tears pooling.

And damn if I don’t feel guilty that I just hurt her feelings.

“Shhh,” I shush her gently, dropping my right hand and bringing it around the front of her body. I slide my fingers between her legs, letting them brush back and forth lightly against her pussy, which is slick and inviting. “Don’t cry, Sloane. I’ll make this good for you.”

She blinks, and a single tear spills. I can’t fucking stand it, so I sink a finger into her and she moans sweetly.

My left hand goes to her strapless top. Pushing it down, I free her breasts and palm one. I rub the pad of my index finger over a nipple while my finger below presses into her deeper.

“What do you want Sloane?” I ask her nicely, imagining all the ways in which I could fuck her right now. “Tell me what you want and I’ll give it to you.”

She takes in a shuddering breath, lifts her cheek away from the wall, and cranes her neck to look at me. Her eyes still shining with wet, she says, “I want you to forgive me.”

My cock leaps in response to those words, or perhaps just at the thought of getting inside that tight wetness, but the asshole in me comes through. I prepare to tell her that’s never going to happen, but then she takes the wind out of my sails.

“Please,” she begs. “Please forgive me.”

With her nipple pinched between my forefinger and thumb and my finger lodged deep inside her, I think for a desperate moment.

Perhaps I should forgive her.

But the words are jammed deep in my throat.

So instead, I kiss her.

When his mouth claims mine, I sigh deeply and melt in relief. He didn’t say the words I needed, but surely… this kiss… it means something, right?

His tongue rolls deeply in my mouth, my neck straining to keep the perfect angle so that he doesn’t break away. I push my hips back, seeking more contact with his body, and he groans when my ass rubs up against his erection.

Pulling his mouth away, breathing hard, Cain’s hands go to my hips. He takes a step back, pulling me along with him just a fraction. One strong hand goes to the middle of my back.

My lips still tingling from that kiss, and my blood racing through my veins, I do as he commands, knowing that the deeper I bend over, the more my ass is tipped just right to him. I brace my hands hard against the concrete wall.

For a moment, his hands are gone and I hear the unmistakable sound of his zipper coming down. I take in a deep breath and push it out roughly when I feel the head of his cock at my entrance. He pushes in slightly, curses under his breath, and his hands are back at my hips.

My fingertips dig into the concrete wall, and I close my eyes tight.

With a roll of his hips, he slowly pushes into me. He doesn’t stop and slides in deep until his pelvis is pressed against my ass and the zipper to his jeans digs into my skin.

“Oh, Christ… Sloane,” he mutters, his breath huffing out over my upper back.

He feels so good.

“Cain,” I murmur, hopefully conveying with that single word what this moment means to me.

Holding me steady at my hips, Cain pulls back and sinks back into me, his cock dragging against every sensitive nerve I have and producing a full-body shudder.

“Greedy,” he mutters, but I can actually hear a smile on those words.

Pulling out, he slides back in with exquisite care. He does it again, and again, not seeming to be in a hurry. I’m not in a rush either, wanting to savor every single moment of him being locked inside me. This may be my last chance, and I don’t want to forget anything.

Cain pulls out. With a rough jerk against my hips, he slams in, the slapping of our skin breaking the quiet night.

“Fuck yeah,” he groans and picks up the pace. I drop my face and stare at the ground, the tips of my red heels peeking up at me and my breasts swaying with the motion of his increased thrusting.

I rotate my hips, try to draw him in deeper. My breathing becomes shallow and labored, my body tightening as I race closer to orgasm. And then Cain hunches his body over me. He slides one hand around my front, going between my legs. His fingers pluck at my clit while he tunnels in and out of me. The other hand comes up, circles around my neck, and he pulls me up slightly.

Placing his lips near my ear, without ever missing a beat of his pumping cock, he murmurs. “Not going to lie, Sloane. I missed fucking this pussy.”

While his voice rumbles richly, the words are designed to let me know that the sex is the only thing he’s interested in about me. That cuts deep, yet I can’t seem to find my own voice to deny it. I want to call him a liar and tell him we had so much more, but every time he hits me deep, my brain starts to get fuzzier and fuzzier.

He keeps talking, a weird mix of sexual heat and frozen taunts.

Not sure I’ll find better than this, but one can hope.

I’m going to come in you so deep, you’ll be feeling me for the rest of your life.

And my absolute favorite, I’ll hate myself for it, but I’ll jack off to this memory of tonight for some time to come.

Finally, he shuts up, and it’s a good thing too because I want to slap him for ruining this. His bitter feelings and acerbic words are starting to cause darkness to well up inside of me. I almost have the fortitude to pull away, but then his finger presses roughly against my clit and he slams into me hard.

His voice breaks when he says, “Christ… you fucking destroy me, Sloane.”

My orgasm tears free, refusing to be quelled, and it explodes out in homage to the explosive passion between us, no matter how much hurt resides there. Cain pulls out, pushes back in roughly, and then starts to shudder as he comes. His forehead comes to rest on the back of my head, he grinds his pelvis against me, and he whispers, “Fucking destroyed.”

My tears well back up again. I blink once and they fall down my cheeks, stream past my jaw, and drip onto his hand. I suck in a breath and tell him, “I’m destroyed too.”