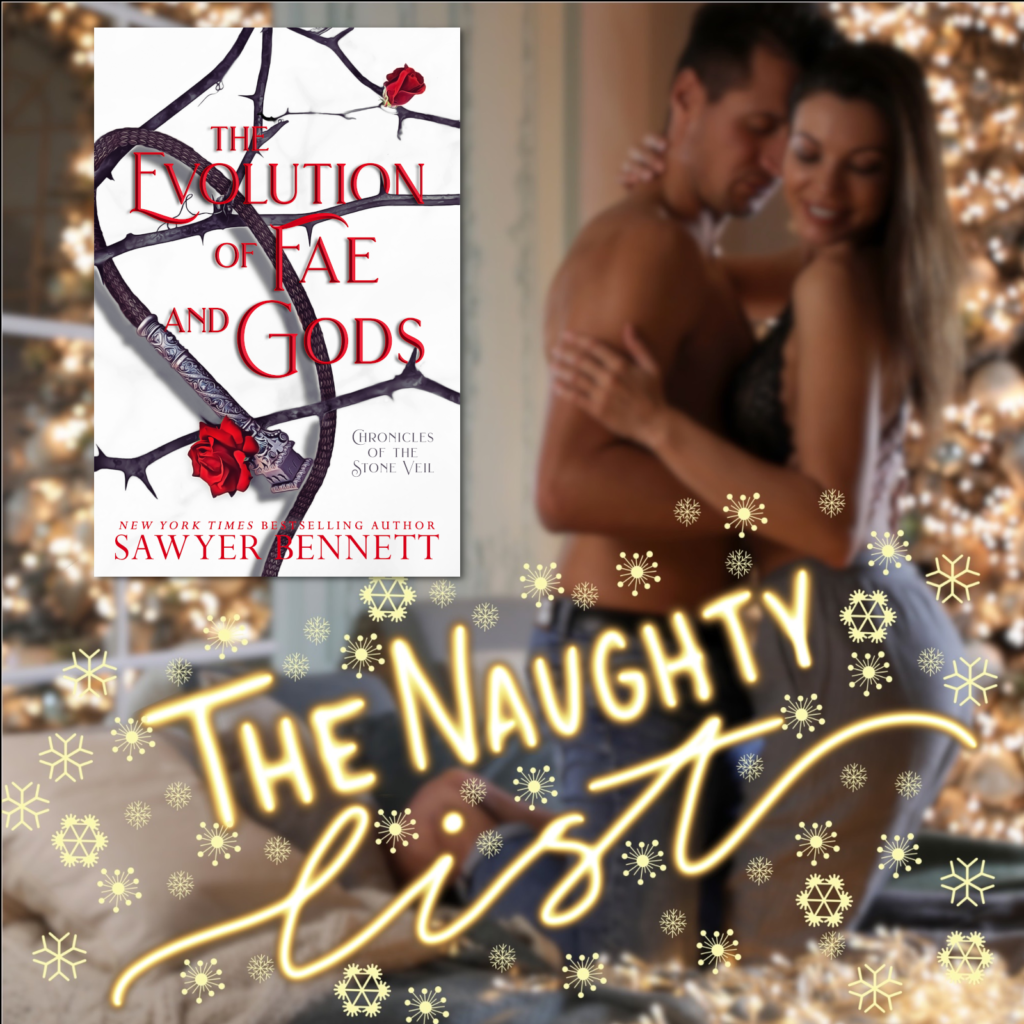 Palms to my cheeks, cupping firmly, Carrick crashes his mouth down onto mine.

I gasp in surprise and then in pleasure as his tongue invades my mouth without invitation. This kiss is wholly different than what we shared in the gym, and it makes the one back in Faere look practically grandfatherly.

No, this kiss is all about passion and lust, and, within it, the desire for a meeting of not only the bodies but also the hearts.

My legs go weak from the intensity of what I’m feeling, but Carrick is quick and agile, and, without breaking his mouth from mine, his hands come under my ass, and he lifts me. My legs wrap tightly around his waist as he spins, moving us through the condo, but I have no clue in which direction.

I’m too consumed by the possessiveness of his kiss and how soft his hair feels against my fingers or how wildly my heart is slamming against my breastbone to notice much else.

All I know is that, at this moment, Carrick thinks me neither stupid nor a child, and while he may still be incredibly angry with me, he still wants me the way I want him.

Vaguely, I hear a loud bang, wood splintering, and I think to myself he must have just kicked my bedroom door open, but I don’t care. I can only feel demanding lips and hear a rumble of need that seems to be ready to erupt from him.

Or is that me?

I just know that it seems I’m falling down, down, down, and I think it must be my bed I land on, but what does it matter because, seconds later, Carrick comes down right on top of me.

Then his hands are everywhere, sliding under my shirt, dipping down to unsnap my jeans, all while his mouth works at me, continuing to brand me.

I’m disoriented, lost, and nearly hysterical when his mouth suddenly pulls away, causing my eyes to pop open. I almost cry out in dismay, but I’m rendered speechless by a demi-god I’m half in love with straddling my body and pulling his shirt over his head. It musses his hair when he pulls it free, making Carrick appear carefree and boyish.

Those eyes are luminous, but, for once, my attention isn’t captivated there. Instead, it moves down over his collarbones, his chest, and his stomach to golden skin and ripped abs with a trail of dark hair that leads down into his jeans.

A demi-god to the core.

Such utter fucking beauty that when his hands move to my t-shirt, I have an attack of shyness such as I’ve never felt before.

No, not just shyness.

“Wait,” I stammer, pushing his hands away.

Red fills his pupils, but he stills, tipping his head slightly and watching me with wariness.

Carrick just stares. He hasn’t said a word since he kissed me, and now I think this is all a mistake. Why in the hell did I ever think someone as perfect as Carrick would ever be interested in me?

Not a real woman.

A spoiled brat. Not attractive.

My body bucks against his, and my torso comes off the bed. Hands going to his chest, I ignore the warmth of his skin as I push him away.

“What’s wrong?” I ask, near hysteria in my voice. “You don’t want this. Me. You made that clear moments ago. I’m a child. Spoiled.”

My voice falters, but I spit it out because it’s the one that hurt the most. “Unattractive.”

“Fuck,” Carrick mutters, his expression one of self-loathing. “Finley—”

“No, this is a mistake,” I cut in, not able to handle the pity in his voice. “You’re a freaking demi-god, Carrick. I’m just a mere mortal and a childish one at that. You’ll end up being disappointed and—”

I’m not sure what happens, but everything goes gray, and the bedroom disappears. Then I feel my stomach flip as I seem to be spinning in a vortex of shadows mixed with light. There’s a weightlessness to my body until the next thing I know, my vision clears, my feet are firmly on the floor, and I’m standing naked in front of the full-length mirror set in the corner of my bedroom.

I flush, going hot all over as I see my reflection and Carrick standing behind me, also naked.

Where in the hell did our clothes go?

“Oh, God,” I moan, partly in horror and partly in fascination as Carrick stares at my reflection in the mirror. My hair is a complete mess, some hanging over my shoulder, some trailing down my back, but it looks windblown, and, if I had to guess, Carrick just cycloned me naked and transported me across the room.

My knees almost buckle as he steps in close behind me, and I feel the obvious evidence of his desire against my back, but he does nothing more than press in lightly. It’s when he brings one arm around me to cup my opposite breast that I start to get dizzy.

Eyes fluttering closed, I can feel nothing but the way his palm curves around the underside of my breast and just holds it possessively.

“Look,” Carrick demands, and my eyes pop open to find his on me in the mirror. “Look at yourself.”

I’m afraid to, but I finally let my eyes cast down on the reflection of my body to where his hand is cupping me. It’s almost too much, that muscled arm crossing over me, his golden skin against my paleness, and I start to tremble.

His other hand comes to rest on my hip as he murmurs, “You are the most beautiful thing I’ve ever seen, Finley. It was harsh—the words I said—born out of anger, which was born out of fear for you.”

But to hear him call me beautiful does something to my soul because those aren’t just words. I hear it in his tone, and I see it right now as his eyes freely wander all over my exposed body, naked except for the one breast covered by his hand.

Dipping his head to bring his lips near my ear, his gaze now pinning mine through the mirror’s reflection, he murmurs, “I’m going to fuck you thoroughly now, and, after that, I hope there’s never a doubt in your mind as to how I see you.”

And… my legs do buckle and my sex clenches, and once again… I’m in Carrick’s arms for a brief moment until I’m under him on my bed again.

As he hovers over me, I hold his gaze for a perfect moment where I see nothing but adoration and desire, and I try to memorize it.

Then his lips are back on mine, kissing me deeply into submission. His hands seem to be everywhere, stroking, pinching, cupping, and then, oh God… delving. It seems like he has me bucking, squirming, and begging for hours, especially when his mouth goes where, in my ten years of adulthood, no man’s mouth has ever gone before.

It has to be magic, or maybe it’s because we have some tie through the fates, but Carrick makes my body sing an aria for him. He makes me orgasm, over and over and over again, until I don’t think I can take another one, and then he proves me wrong.

But if the gods strike me down right now, I’ll be happy. The moment he enters me with one hard, fluid thrust, I think my world shatters because everything I thought I knew about sex and passion and intimacy has become a sham.

With every stroke of his cock and his tongue, I fall farther and farther into a place that belongs only to him.

But what affects me the most is seeing Carrick affected.

My cool, detached, unemotional demi-god isn’t recognizable to me anymore. So many emotions register in his expression—from raging lust to almost painful tension with the need to release—and Carrick doesn’t hide a single one from me.

As his thrusts get faster and I feel myself building up again, he captures my eyes with his own, making it impossible to look away.

And then he finally plants himself deep—so incredibly deep that I feel him through to my soul—and I lose his gaze as he throws his head back and roars out his release. It triggers me, and I buck under him as a violent orgasm hits me unaware.

My eyes close, and a weird barrage of images flash before my eyes.

All of Carrick’s face.

A Carrick I don’t know.

It feels like a rubber band is stretched taut between Carrick and me, and then something snaps into place. I’m not sure if this is a premonition of our future, but the overwhelming feelings that tie my heart to my body’s physical reaction have me crying out his name from the intensity of it all, and I forget all about those images and instead ride the quakes of pleasure that overtake me.

I vaguely feel Carrick’s mouth on mine again, kissing me through our orgasms as if to seal the experience as some sort of pact.

He gentles the kiss, letting me free-fall back from the explosion, then drops some of his weight on me, which is oddly comforting. Pressing his face into the side of my neck, he murmurs, “So fucking beautiful.”