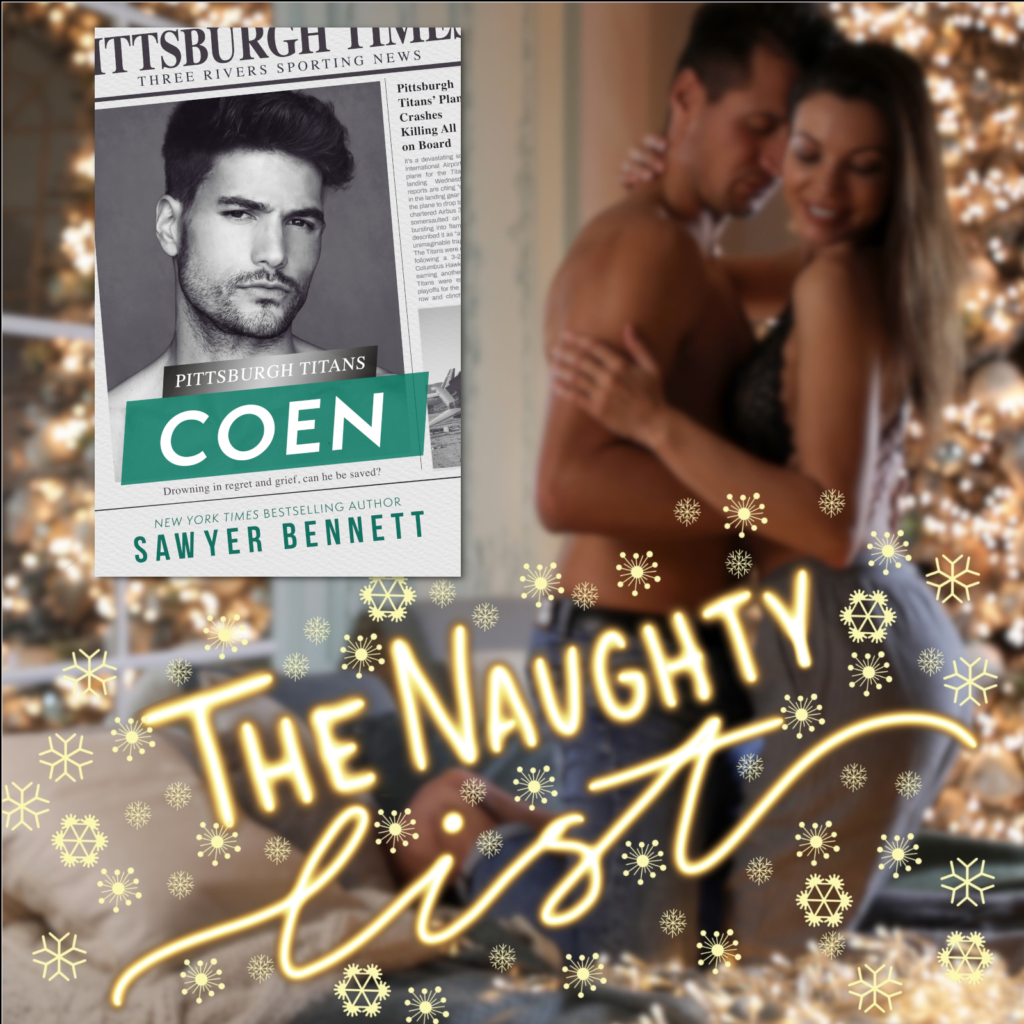 Coen wrenches his mouth away and presses his forehead to mine. His chest heaves, and my legs shake. “Why are you such an irritating pain in my ass?”

I open my mouth to argue, but he shakes his head. “Never mind. Don’t answer that.”

And then he’s kissing me again, and I cling to him for dear life.

This is, without a doubt, the most bewildering yet exciting thing that’s ever happened to me in my life.

This man, who I pretty much despise but who I’m also heavily attracted to, seems to have the same draw to me.

And he’s gorgeous and domineering and grumpy, and for some reason, he makes me want to be impetuous right along with him.

I give myself grace—just a moment to honestly ask if I’m crazy for letting him kiss me—and then I decide I want to be crazy and see what’s on the other side.

My hand slides into his hair, fingernails scraping lightly along his scalp. His chest rumbles, and his hands slap to my ass, pulling me against his hard length as he brutalizes my mouth.

And then… he hoists me up, forcing my legs around his waist, and he’s walking.

Moving gracefully without once lifting his lips from mine.

He backs me right into a tree—thoughtful or not, the bark is smooth, so I’m guessing yellow birch, but I’m not about to pull away to verify.

With my body pinned against the trunk, Coen grinds against me, and a jumble of words fall from my mouth into his.

My fingers tighten in his hair and I grip hard, causing him to hiss.

But he never stops kissing me or pressing what is an intimidatingly large erection into my core.

I’m hot, needy, on the verge of begging, and he’s been kissing me no longer than fifteen or twenty seconds at most.

Coen’s mouth moves from mine to graze along my jaw, feather down my neck, and then he bites me on the tender flesh just below my shoulder. I jerk in his arms, and he chuckles against my skin, except it doesn’t come across as amusement.

More like sinister promise, and I’m okay with that. For one reason only, and that’s despite him being a world-class jerk and my border enemy, he saved me from bullies today. He played it off and would deny it if confronted, but he heard the things Cici said to me, saw that she wasn’t going to stop, and he chased her off.

It pains me to admit, but this puts my nemesis in a gray area where I’m wildly attracted to him, even knowing he’s going to use all his resources to bring me down.

Is that what makes this more exciting?

No time to ponder that as Coen lowers my feet back to the ground, and I almost protest, but then his hands are at the button and zipper of my shorts. His fingers move fast, efficiently, and in the blink of an eye, his hand is down my panties.

“Oh,” I gasp, head falling back against the tree. He does no more than cup me, and I swear I can feel my heartbeat between my legs, pulsing against his hand.

Coen stares down at me with such a feral intensity, it makes me want to shrink away, even as my hips push insistently against his hand.

“Christ,” he mutters and I rock against him wantonly. His eyes blaze with what looks like both lust and irritation, and I understand it all too well. It’s exactly how I feel right now.

His hand squeezes me and I groan, but then it’s gone.

I start to cry out in true protest—hell, give me a sign, and I’ll march the picket line—but then my breath freezes as he falls to his knees. Gripping my hips, he presses his face to the juncture between my legs and exhales hot breath that seeps right through the fabric and into my skin.

Tipping his head back, he says, “Tell me to stop.”

I’m mesmerized by how beautiful he is kneeling before me, and there’s no way in hell I’m going to tell him to stop. I have no clue what he even wants to do to me, but I’m going to find out. I give a tiny shake of my head and that’s all he needs. Coen yanks my shorts and panties down my legs. My hands flail out as I’m practically knocked off-balance, only to slam on his shoulders to steady myself.

When my matronly Bermuda shorts are at mid-thigh, I’m stunned beyond belief when Coen leans in, presses his mouth to my exposed sex, and runs his tongue straight up my slit.

“Fuck,” I scream in pleasure and astonishment.

Never has any man done something so wild and carnal to me.

His head tips back, and his eyes are so dark, they’re almost black. “I’m a kinky son of a bitch, Tilden. If you want to run, you better do it now.”

Do I want to run?

My brain hollers that I should, but my body remains stubbornly still.

He must take my hesitation as capitulation as he presses his face back into me, growling as he licks. His hands work to yank my clothes down my legs. They reach my ankles and he lifts a leg up, never once slowing his ministrations with his mouth. He roughly jerks off my tennis shoe, pulls my foot through the leg of my shorts, and then hikes it right up over his shoulder.

My face heats as I’m splayed before him, but he doesn’t pull back to look—merely dives in deeper with his mouth to lick and suck at me. I writhe and whimper and I almost break apart when he mumbles against me, “So damn sweet.”

“Coen…” I gasp as I pull at his hair, delirious from the sensation overload.

He grunts in response, lowers his other shoulder, and drags my other leg up and over. The man has me pinned against a tree, my legs over his shoulders, tongue against my clit, and when he adds a finger inside me, I flip out.

I buck hard against him, but his strength holds me in place. My entire body flushes hot—so hot I’m going to melt—and then his lips form around my clit, and he viciously lashes his tongue against me.

I cry out as pleasure bursts inside me, spreading outward in waves of bliss that curl my toes. My hands clutch onto his head as he continues to lap at me. My hips flex up and down, his mouth still dragging out tremors of pulsing euphoria in what will forever go down as the most intense orgasm I’ve ever had.

Suddenly, I’m boneless, and but for Coen’s shoulders holding me up, I’d happily fall to the ground where I could just look up at the leaves and smile for a good hour or so while I reflect on what’s just happened.

Coen pulls one leg off, making sure it’s steady on the ground before doing the same to the other. I take a shaky breath as his mouth skims over the curve of my lower belly. “I knew you’d be a screamer,” he murmurs.

His head falls back, and when our eyes meet, I realize it’s the first time I’ve not seen what I can now pin as an ever-present, underlying anger. He looks wound tight, but he doesn’t look pissed about it.

Things would probably be okay if he’d stand up and kiss me. So I’d know that I didn’t just give in to lust so easily because there might be something there.

But he doesn’t do that.

He rises, and I put my hands back on the tree trunk for balance. Wetness glistens on his lips, and I almost combust when he licks at the lower one.

Coen’s gaze moves from me to the trees over my shoulder. A thoughtful expression softens his face and then a mischievous light glitters in his eyes.

Those lips that just destroyed me curl into an evil smirk, and he wipes his hand across his mouth. “Couldn’t have done that to you if you’d have cut the trees down, now, could I?”

Coen pivots on his foot and walks away, chuckling as he heads toward his house.

“Seriously?” I call after him, bending over to thread my foot back through my shorts.

I’m pulling them up as he turns his head slightly to yell over his shoulder, “We should have a bumper sticker made. Save a tree, ride my mouth.”

He laughs heartily at his joke.

Did he do that to me just to make a joke? Prove a point?

Was there even any attraction, or was he just putting me in my place?

“You’re an asshole,” I call after him, angrily zipping my shorts.