It Is Not Okay To Tell People To Kill Themselves

I hesitated in writing this post because I don’t want to give any attention to the narcissistic jackwad known as Paul Blake, Fitness and Book Cover Model, but the more I’ve come to hear about the terrible things he’s said, the more I feel like I have to say something.

Consider this my rant…

I knew nothing of Paul Blake before this weekend. Don’t really care to know much more about him. But he’s developed quite a name for himself in the past few days by making reprehensible comments on social media, including telling people to kill themselves. Here is the post I believe started it all when he body shamed a woman and then told her to kill herself. 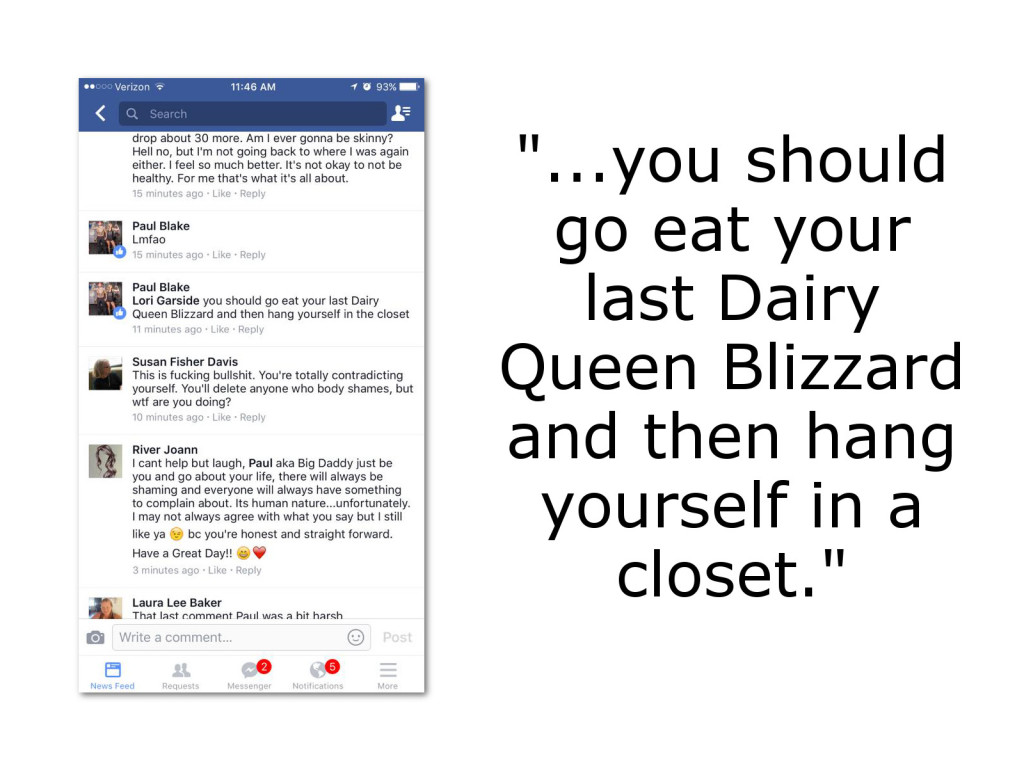 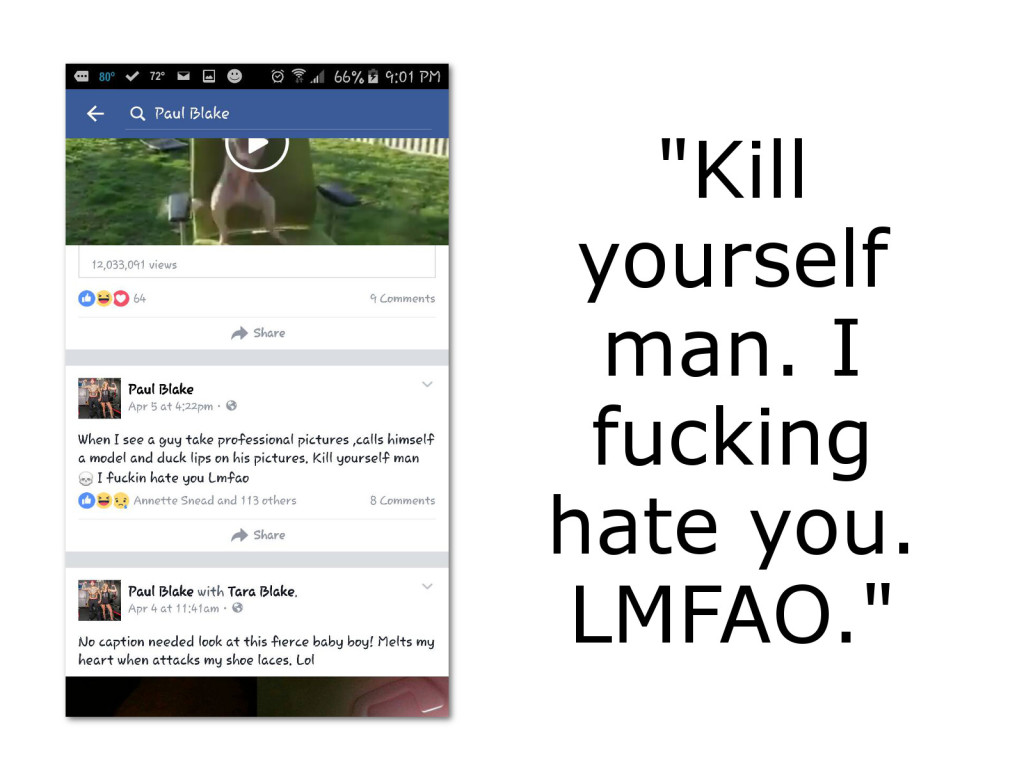 Nor was it the last… 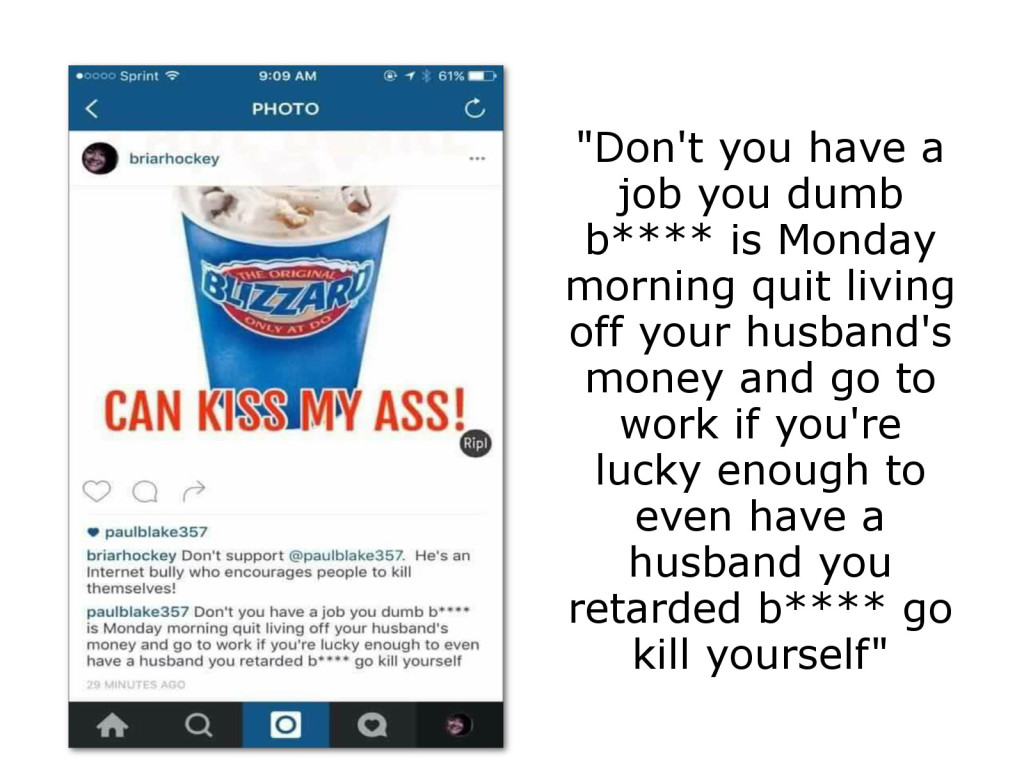 Even as a writer, I don’t have the imagination to make something this vile up. These are real words someone told another person. Clearly there is something wrong with this man. People with morals, a conscience and a respect for humanity never tell people to kill themselves. It is not okay.

And I get the anger that this has incited among the thousands of people that are appalled by his behavior, and I’ve seen some responses from people telling him to go do the same. To everyone whose blood is boiling as lava-like as mine, please don’t. Please don’t stoop to his level, and please don’t give credence to his mistaken thought it’s okay to tell people to kill themselves.

How about instead, we rise up and institute a boycott against this man? He holds himself out as a public figure. He has over 50,000 Facebook fans, many I bet have no clue this is even going on. No idea how many Instagram followers he has, but he holds himself out as a fitness model and even names those businesses that he’s worked for.

Please see if he’s your Facebook friend and “unfriend” him. I’d go ahead and block him for good measure, because who needs that type of person in their life.

Go to his Facebook page and hit that “Unlike” button.

This will send the biggest and clearest message to him that this behavior is not acceptable nor should it be tolerated. In fact, he should be given no attention at all. Many people have spoken out against him and posted messages to his social media. What has this done? Nothing.

It’s merely fueled him to go on further rants. 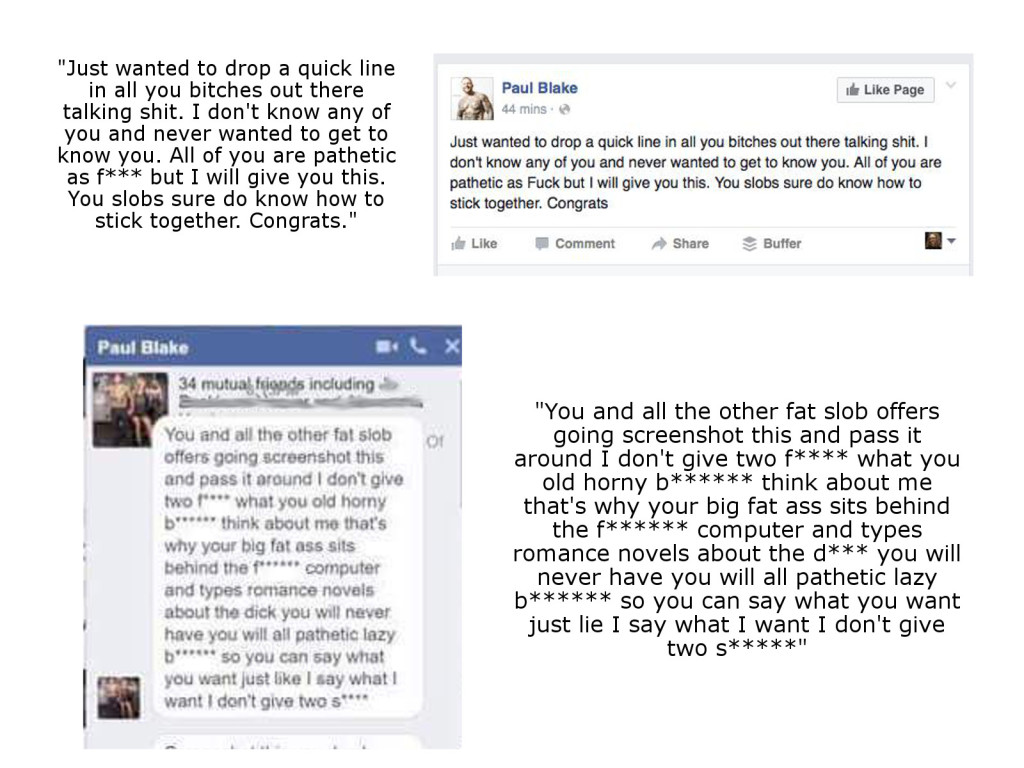 Now, on to the real reason I wrote this post. As despicable as his words are, they shed light on a very important issue and that is awareness of mental health issues and what we can do to help prevent suicide.

May is Mental Health Awareness Month. For the past three years, I’ve worked with The Keith Milano Memorial Fund to donate a portion of my May royalties to the American Foundation for Suicide Prevention. I do this because I like to focus on the word “awareness”. We need to open up about mental health issues and not be afraid to talk about them. We need to erase the negative stigma associated with it.

So in a way, I believe that something good may have come from Paul Blake’s horrific comments. He is clearly not aware of the devastation that mental health diseases can cause. He’s clearly never known the pain that suicide can inflict. If he did, he would have never made those thoughtless comments. So perhaps in addition to boycotting Mr. Blake, we can also use this to open up serious discourse about depression and suicide. Let’s discuss it and not be afraid to do so.

In closing, while I’m intentionally not tagging Mr. Blake in this post as I don’t think he would really care one way or the other what people think of him, I sincerely hope that someone that perhaps cares for him will intervene and get him some help. Someone needs to take his hand and lead him to a place where he can evaluate the source from which this rage emanates. Maybe someone should talk openly and without judgment to him about getting help, because otherwise he’s heading down a dark path that could tragically end up destroying him and the ones he loves.

If you want more information about mental health awareness or suicide prevention, you can visit The Keith Milano Memorial Fund or the American Foundation for Suicide Prevention. Most importantly, if you are contemplating suicide, please reach out to someone for help. If you are in crisis, please call the National Suicide Prevention Lifeline at 1-800-273-TALK (8255)