For the past seven days, I’ve stumbled.

Didn’t fall flat on my face, but there were some faltering steps.

It started last Wednesday when I had some dental work done. Popping two old, silver fillings (does that date me?) and having them refilled; also two other cavities I’m sure are the result of a slight chocolate addiction. This was all done under conscious sedation because I’m the biggest wimp when it comes to dentists. While I was fully awake, the medications took away my memory of everything! #Score

So the beginning of my stumble really shouldn’t be quite my fault. I mean, when my husband, Shawn, was driving me home, I’m sure it was the drugs talking when I asked him to stop at Starbucks for a venti caramel frappacino. Hell, I could even blame him for allowing me such a sugary treat that is not on my approved eating plan during my transformation challenge. So, we will let that one go.

I made a slight rebound, dutifully exercising at the gym both with my trainer, and without. Did a group workout with the Iron Army that was super fun. I even took a stab at making a high protein, low carb pizza where the crust is actually made from ground chicken (recipe here). Yes, that’s right… ground chicken. And you know what? It was fantastic. I loaded it up with meat, cheese and a sugar-free barbeque sauce and it was excellent. Looks yummy, right? 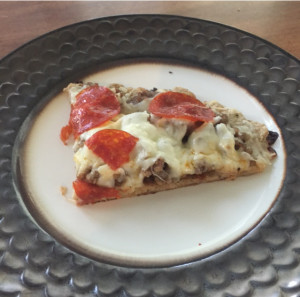 All was well, and then I stumbled again. Not that these are excuses, but it was Labor Day weekend and good food was on the agenda. Add onto that, we had a senseless death in the family when a cousin was hit and killed by a drunk teenager talking on her phone. It seemed, to me, the perfect excuse to just give in to my natural inclination to let food comfort me.

Behold my second Starbucks offense in less than 7 days. However, note that I did it with my chin held high and publicly confessed my sin to my trainer, and even called him out… daring him to make me suffer at our next session. 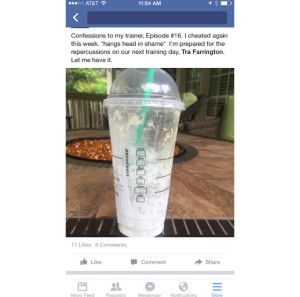 Sadly, this wasn’t just a second, tiny stumble. Drinking this delicious, cool, sugary drink then gave me free license to have a bowl of Count Chocula cereal my husband found at the grocery story. And that might have led to another.

Now, with my eating plan blown, I only had my dedication to the gym to help salvage my week. Tuesday rolled around, and my dear trainer, Tra, texted me that he had been in an accident. As in, hit by a car while in a crosswalk type of accident. But, being the superhero that Tra is, he merely jumped over the bumper, slammed onto her hood, and banged his head good. Minor concussion and he was out for a day. But come on… the guy is a beast. He not only leaps over cars, but he deadlifts them too.


PSA: Also let it be known, this girl that hit Tra was young and was texting on her phone as well. I find it spooky that two accidents to people I know, both as a result of using cell phones while driving and two very different outcomes. Just a slight variation in any of the forces involved, and it could have been a lot more serious for Tra. I’m so glad he’s okay and if you know someone that routinely does this, take a moment and ask them please not to. It’s a tragedy waiting to happen.

So, with Tra out on Tuesday and me being overly saturated with sugars from frappacinos and Count Chocula, plus with the fact I released Ryker from the Carolina Cold Fury series on same day, I used that as an excuse not to go to the gym.

I had reached the ultimate amount of stumbles that I should be allowed in a week. I confessed my sins to Tra, all of them, and his eyebrows definitely raised when I told him about the Count Chocula. But when I hit the gym yesterday, and he told me that he was going to work me into the ground, I actually welcomed it. I needed a reset. He never made me feel bad for my stumbles, but instead just looked forward to a new week of dedication.

This is important, because I spent years trying to get into a habit of working out and eating healthy. I’ve gone weeks; sometimes months, but then I have those stumbles. And I would use those stumbles as continuing excuses not to re-engage my mind and body to that attitude that’s needed to maintain. It is all about attitude, dedication, determination. You have to want that end goal badly, and as you all know, my end goal is to be healthy for my daughter.

So, it’s okay to stumble. We all have our weak moments but it doesn’t mean that we are less than what we are meant to be. It simple means we are human. I’ve learned that I can’t let it get me down. I can’t let it deter me from my course. I need to reach deep within and find that fortitude necessary to drive me through the pain, sweat and tears that come with getting healthy. 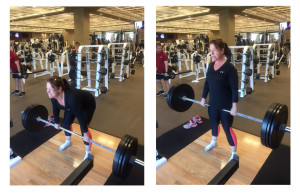 Tra put me through my paces. He caught me making total ugly-face doing deadlifts. My hamstrings were barking at me this morning. He totally blasted my lats and biceps today, starting me toward a goal of being able to do pull-ups. I’ve never been able to do one in my life and I’m a goal oriented person. I find if I don’t have something very specific to strive for, I can pretty much count a flagging desire to see it through.

I’m back on track. There may even be future stumbles ahead, but I know that I won’t let it keep me down permanently. Have you had some stumbles? Need to vent about it. Let me know.

Incorporate longer sets in your training (10-15 reps) when aiming to burn more fat for a sustained time period post workout.