Are you ready for some football?

August is coming to a close and fall is right around the corner. Do you know what that means? 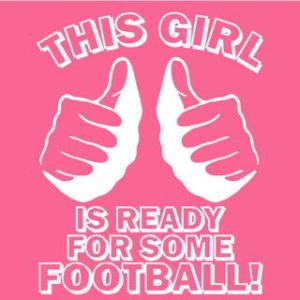 I love hockey and I might write some hot hockey hunks, but there is just something about football. The crisp fall air, the snap of the ball, the crashing of helmets, the men in tight pants. I digress, but the point is, there is nothing like a good game of college football to pass a Saturday afternoon.

On any given Saturday, you’ll find my husband and I watching the games. Cheering for our favorites, and against our biggest rivals. Who is my team of choice?

That’s right, this gal is a fan of the scarlett and gray. The Buckeyes. THE Ohio State University!

You might be asking how a lifelong North Carolinian ended up a Buckeye fan. It started with familial ties in Ohio, but then I went and married one! Even my adorable daughter, Parker, sports the scarlett and gray on game day. It’s a family affair in our house! 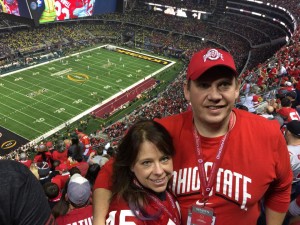 When the Buckeyes won the 2014 National Championship, guess who was there? My husband, Shawn, and I! We flew to Arlington, TX for the weekend and we were there to see Ohio State defeat Oregon 42-20. I cannot put into words how cool it was to be there to see them hoist that national championship trophy in the air!

I’d like to think that Shawn and I being at the game provided the Bucks with just a little extra mojo. I think we should get to hold the trophy too!

Just ten more days until the kick-off of the 2015 season, and I’m hoping for a repeat trip to the National Championship game. A girl can dream right?