I’m so excited to be releasing a romance serial starting in January. It’s called Legal Affairs and it will have six episodes, releasing every two weeks. This book is HOT and FUNNY and has legal shenanigans and other shenanigans if you get my drift!

One year ago, I graduated from law school and embarked on a career as a purveyor of high priced legal shenanigans.

Six months ago, my boyfriend dumped me when I thought he might be proposing.

Two weeks ago, I got drunk and joined a secret sex club.

Two days ago, I had a torrid one-night stand with a stranger.

Today? Well, today I’m contemplating having an affair with my boss.

My name is McKayla Dawson but everyone calls me Mac. I work at the powerhouse firm of Connover & Crown, LLP, where the law has never felt so hot.

Legal Affairs is a serial romance with a whole lot of hot and a little bit of funny. It has six volumes that will be released every two weeks, the first one, entitled Objection, on January 10, 2014.

And now… for the cover reveal… and continue reading past that for a scene excerpt!!! 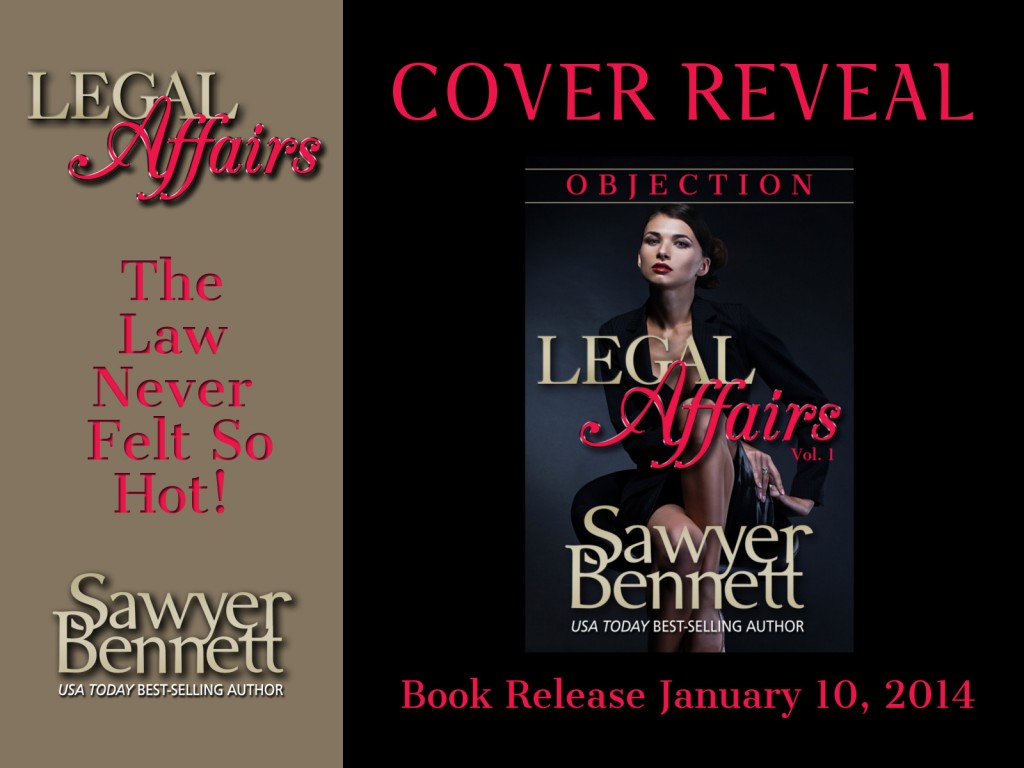 I’m frozen in place. I have to clue what to do.

Yes, I have hormones, pheromones, and even just good old, run-of-the-mill moans stuck in the back of my throat, which are on the verge of busting loose. My mind whirls… what did Matt meant by that statement?

Do I slap him or jump him?

We stare at each other… his eyes blazing an inferno of desire, mine probably reflecting the “deer in the headlights” look.

Swallowing hard, I say, “I think—”

Matt lunges at me, catching me with one arm around my waist and the other swiping across my desk, sending binders, papers, folders, pens, a tape dispenser, a stapler, two legal pads and a box of paper clips flying to the floor. “Don’t say a fucking word, McKayla. Just don’t.”

Pushing one of his rock hard thighs in between my legs, he bends me back onto my desk and settles against me, raising both hands now to cup my face. My heart is on the verge of exploding in my chest, and only two things fill my mind.

I’m saved on both concerns as Matt pours lust, desire, anger, and passion into a kiss that causes my toes to curl against the flip-flops, which are barely clinging to my feet after I was practically thrown onto my desk.

My tongue is shy at first, but it only takes Matt one tiny rock of his hips against mine, and then it’s on.

We kiss like we never kissed on that one night we spent together. It is filled with not only yearning, but with a bit of frustration and shame that we have no control over our actions.

This is wrong… we both know it.

Yet he hums with approval when I reach my hand down between us and give him a light stroke, and I practically convulse when one of his hands cup my breast.

For a brief moment, Matt seems to come to his senses and stills against me. He rises up from my mouth and stares at me deeply, worry creasing his forehead. He even curses just the way I’ve come to appreciate about him. “Fuck, fuck, fuck, fuck.”

“We don’t have to—” I start to say, but he growls at me so I snap my mouth shut.

He stares at me for just a moment more, and then he abruptly stands up. I think it’s over, that reality has reappeared, and disappointment fills me.

That lasts just a flicker of a moment because fantasy land returns as Matt starts stripping me of my clothes.

In less than fifteen seconds, he has me completely naked and splayed out on my desk in front of him. He looks down at me, eyes roaming, and he actually licks his lips like he’s getting ready to gorge himself.

Yes, I’m ringing the dinner bell… bring it on.

I expect Matt to undo his pants and mount up, but he surprises me when he pulls one of my chairs closer to the desk and sits down. He takes my legs, spreads them outward, and tugs me to the edge of the desk, throwing said legs rather haphazardly over his shoulders.

Pleasure and thrills blanket my body as I realize that he’s settling in to do me right. His face dives down, and I actually grunt… yes, grunt… at first contact. I then bite down hard on my tongue so I’m not screaming the rafters down.

I’m delirious with pleasure as Matt works my body to his liking. He uses touch and sound to give me the ultimate experience. Touch meaning fingers and tongue, and yes, even his chin, which has me bucking off the desk. Sound meaning the dirty, dirty things he whispers to me as he causes a rollercoaster of an orgasm to go rushing up my spine. I have to slap my hand over my mouth not to scream, and Matt looks up at me with pure male satisfaction.

It took him just under two minutes to send me to Heaven.