COVER REVEAL – Playing With Her Heart by Lauren Blakely

So happy to share this amazing cover reveal from my friend, NYT and USA Today Best Selling author, Lauren Blakely.  The cover model is Steve Boyd and he is simply scrumptious, right?  PLAYING WITH HER HEART is a Contemporary Romance novel and is part of the Caught Up in Us Series, although it can be read as a standalone. It is due to be released on August 20, 2013. 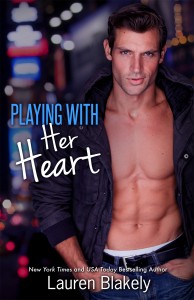 ABOUT PLAYING WITH HER HEART:

When you’re acting the role of a lifetime, how can you know if love is real—or all just a part of the show?

Twenty-three year old rising theatre star Jill McCormick has built a life out of pretending. Pretending she’s happy, pretending her long-distance crushes add up to something real, pretending she’s not haunted by the dark secret that shattered her world six years ago. Cast in her first Broadway show, she desperately needs to keep her façade intact, but that’s before she comes face to face with her devastating new boss…

Hot-shot director Davis Milo knows the first rule of directing: never fall for your leading lady. Captivated by Jill’s raw talent, he fights his feelings, but watching Jill on-stage with another man is more than his jealous streak can take. Keeping things professional isn’t an option. He wants all of her.

Soon the ingénue and her director are staying late in the empty theatre, their private rehearsals spiraling into new, forbidden territory. Caught up between fiction and reality, Jill struggles to find the truth in all their staged kisses. But how can she be sure that what she feels is real, and not a part of the play? And when two people spend their lives pretending, what happens after the final curtain falls?

He glances down at the black pumps. “Nice shoes.”
As I follow his eyes, I realize my hand is on his shirt, my fingers
fisted around the cloth, clutching it. I should let go. But I don’t.
Because I can’t help but notice he has that clean and freshly showered
smell that makes any woman want to lean in and lick a guy’s neck.
Close her eyes. Inhale, and trail a tongue all the way to his
earlobe, enjoying the sound of a low groan.
“Nice shirt,” I say softly, running my index finger across one smooth
button. Then I look up to find him staring down at me. His dark blue
eyes aren’t cold anymore. They’re not keeping me at bay. Instead,
they’re heated, searching mine.
It’s hypnotic the way he looks at me. Completely hypnotic, as the
room goes quiet, the air between us charged.
I press my teeth against my lips, and I think, but I’m not entirely
sure, because thought has vanished, that I nod briefly, almost as if
I’m giving him permission. Then he bends towards me, and my breath
catches. Before I even process rationally what’s happening, his lips
are on mine, and my pulse is racing. It’s a barely there kiss, just
him brushing his soft lips against mine, but I want more. So I pull
him closer and deepen the kiss. He groans, and then suddenly his hands
are in my hair, and he’s twining his fingers through my long, blond
strands, and tugging me close. I thought I was leading this kiss, but
I’m not anymore, because he’s claiming me, tracing his tongue across
my top lip, then nipping at the bottom lip, then kissing me so deeply
and with so much heat that I shudder. That only makes him kiss me
harder, and everything else falls away because this is a kiss I can
feel in every single cell in my body. Deep, and fevered and
possessive.
It makes me feel things I’m not supposed to want.
My heart pounds wildly as he presses closer, so dangerously near to
me that I want him to slam me against him. Let him touch me all over.
His lips own me, his hands want to know me, and I swear I might
combust from this kind of electric contact.
He breaks the kiss and I’m not honestly sure where I am anymore. Or
who I am. I look at him, at Davis, but everything is so hazy right
now, that I don’t know what to say. I don’t think he does either,
because he doesn’t speak for a moment. He shakes his head, and
swallows, collecting himself. As if he doesn’t know how that happened
either.
“I’m sorry,” he says, then steps back, pushing his hand roughly
through his hair. He looks away from me, staring at some distant point
on the wall. “That was a mistake,” he says quietly.

Lauren Blakely is an unabashed fan of clever jokes, toast, and good guys in novels. Like the heroine in CAUGHT UP IN US, she thinks life should be filled with movie kisses and coffee drinks. Lauren lives in California with her husband and children, and spends her days writing both true stories and make-believe ones.

PLAYING WITH HER HEART Goodreads: https://www.goodreads.com/book/show/17452343-playing-with-her-heart