May is Mental Health Awareness Month. For those of you who read Off Limits, you know that the main character, Nix Caldwell, suffers from Post Traumatic Stress Disorder and received psychiatric help. I have been so blessed that this book has touched a few people, two in particular who reached out to me because suicide has impacted their lives.

Darlene Avery lost her son, Matt to in 2010 and Denise Milano Sprung from over at Shh Mom’s Reading lost her brother, Keith Milano in 2004. Because of these two ladies who so bravely talk about suicide, I started learning more about it.  I’ve also had a lot of discussions with my husband, Shawn who has his Masters and Ph.D. in psychology. The problem we face is that mental health disease has such a negative stigma attached to it, we tend to sweep it under the rug.  The mere fact that Darlene and Denise are so open about it, gives me such hope that mental disease can be fought and defeated. 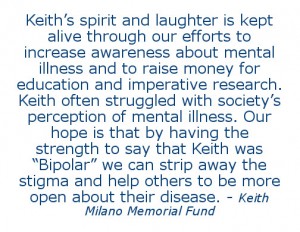 To honor Matt and Keith, and their brave family members for calling attention to suicide, I’m going to be donating a portion of my profits from Off Limits to the Keith Milano Memorial Fund, which was set up to benefit the American Foundation for Suicide Prevention.

There are a few other authors who are doing the same, and you can find links to their books on Keith’s Facebook Page.

Click here if you want to make a direct donation to Keith’s fund.

To learn more about suicide prevention, visit the American Foundation for Suicide Prevention.